15th November
​Harry passes his Driving Test. Very exciting!
8th November
​Harry fails his driving License. He gets a second chance on Friday
7th November
​A very short concert with Bobby on the violin and me on the piano. Rowdy applause from the rest of the household.

29th October
Sadly had to sell the car I bought for Manuelle in High School (No Motorcycles in this house!). We are truly struggling to make ends meet and as Manuelle is now fully employed in Phuket, the Chevy had to go.

19th October
Bobby and AhSong are sharing their birthday this evening. Bobby is now officially a teenager and AhSong is becoming positively middle-aged.

16th October
Manuelle left home for the first time for a year's contract with Club Med in Phuket. He will be working in their sporting activities department with an emphasis on children. I shall keep you updated. It was an emotional farewell at the airport this morning and the house feels lessened by his absence.

​Oo and Wan begin their second term of school. I need to pay fees - any takers?
15th October
​Ahsong's Birthday. He was working so he will share Bobby's birthday party this Saturday. 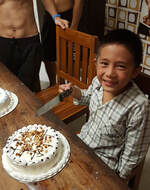 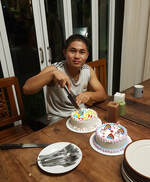 1st October
​Harry's 18th Birthday
September
27th September:
​Little kids on holiday for a month. Anybody want to sponsor a quick trip to the seaside before I lose my marbles?
6th - 8th September:
Herb Ratner and his wife Laura visited. We shared a wonderful lunch at The Gymkhana.
3rd September:
​Moved houses. A nightmare in every sense, but it has definitely worked out for the better. We now have a roof.

31st August:
David has his stitches out. A six foot baby!
29th August
Manuelle was offered a position at Marriott hotels. He turned it down for a simultaneously offered position at Club Med in Phuket. He will receive a higher wage, and all food and accommodation is provided by Le Club. Additionally and most importantly he will be offered jobs in other facilities around the world after his first six months. I applaud his decision.

Sean has settled wonderfully well into Warmheart and loves being out in the country. They are paying him a small salary due to the fact that he works harder than anyone else. This weekend he decided to not return home - sad for us but a real sign that the right decision has been made.

​Sean will move to Warmheart for five days a week of therapy. He will spend the weekends with us. Initially this will be for a trial period of one month.
16th August:
Warmheart
17th August.
I am afraid that due to the intransigence of our landlord, we have had no choice but to break contract and look for another house. Even a tent would be better than the conditions we are living in. Will let you know when we have found somewhere suitable.
24th August:
David rips his arm open on a nail as he careened through the house. Eight stitches and a lot of blood later he was just fine.

August 13th:
​Potter returns to Lanna for one more school year to achieve further A levels

August 5th:
Pon (5 years old) had his first ever trip to the dentist and an extraction.
​He was very cool about it!

Saturday 3rd August:
​Potter departs for Balliol College, Oxford University.
This has been postponed to 2020 due to the UK refusing him a Student Visa.
​We are very shocked. 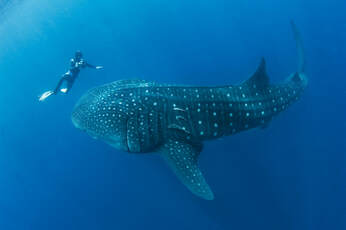